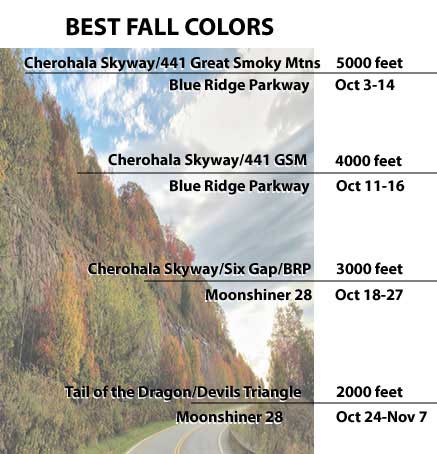 Peak colors typically occur during the last two weeks in October, but that is dependent upon fall temperatures and in particular, the first frost date. The color change begins at higher elevations where you see the earliest changes in late September, and continue all the way into mid-November at the lower elevations.

The Sourwood and Dogwood trees are the first to turn red early in the season. Next are the Tulip Poplars which turn yellow, but then quickly turn brown. Peak leaf season brings in the red, orange, and yellow of the Maples and the bright yellow of the Birches. Oaks and Sweetgums finish up the season with purple, orange, and red.

Fall wildflowers on the Cherohala Skyway provide a beautiful display of colors starting in September up to the first frost in early October.

The higher elevations such as the Cherohala Skyway, US 441 through the Great Smoky Mountain National Park and the Blue Ridge Parkway will have the first colors. Take a jacket because temperatures can be 10 degrees colder at 5,000 feet. Remember that sightseeing will bring more traffic and it’s moving slower.

Falling leaves can be a problem in wet weather. Once the roads dry, the leaves usually clear fast. We have seen snow as early as Halloween but it doesn’t stick long. First snow is generally during the very end of October and first part of November, of course warmer temps follows.

The fall color forecast is looking dim for 2020, according to the annual prognostication offered by Western Carolina University biology professor Beverly Collins.

The color peak will likely be less dramatic than usual unless the region sees a stretch of sunny days and cold nights in late September and early-to-mid October, Collins said. Some level of stress and cold temperature is required to promote abundant yellow, orange and red pigments in the trees’’ leaves, she said, and such weather has been absent from Western North Carolina this summer.

“The warm, rainy summer caused little drought or ‘hot sunny day’ stress and promoted a lush, full, green leaf canopy,” Collins said. “This is true even in some species we don’t want around. For example, kudzu seems to be overtaking road signs and covering trees at a faster clip than in years past.”

A long-term forecast predicting warmer-than-average temperatures in September and October means that low temperatures around Cullowhee may not reach the 30s until the last week in October — the summer weather pattern might be around for longer than normal.

Fall colors are a mixture of pigments that are revealed as photosynthesis and chlorophyll production wind down and eventually stop as the weather turns cold. These pigments — especially the yellow and orange pigments — play a role in photosynthesis and help protect the plant from stresses; for example, when there is drought, when it’s bright and hot, or under high UV conditions. The pigments are always there in the leaf, but may be relatively less abundant when conditions are wet and warm. The red pigments, called anthocyanins, are also produced more in fall when the weather turns cool.

While a muted fall color display seems likely, Collins acknowledged that, as with any forecast, there is room for variation.

“As we know, local light and temperature conditions vary widely in the mountains over elevation, slope exposure and vegetation type, and there certainly will be areas where colors are brighter or arrive earlier or later,” Collins said. “Sites that typically ‘turn earlier’ are likely to do so again, and colors will progress down the mountain and north to south as they have done in the past.”